The Guitar originated in ancient Persia... 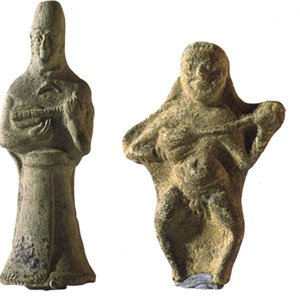 According to the history of guitar on the instrument is based on an anciet instrument in Iran.

"Guit" comes from the Sanskrit word "Sangeet" meaning "music" (Sanskrit was the official language of the Aryans), and "tar" is purely Persian and means "chord" or "string" .

In traditional Persian music (still a popular style in Iran) different variations of the instrument exist including the "Tar" and the "Setar" (which means "three chords" but for some reason it has four)!

The Photo: Figurines playing the ancestor of the guitar. Excavated from Susa, Iran, 3rd millennia BC. Iran National Museum. Source: Wikipedia.
Posted by Hooman at 12:00 p.m.